Why are the Religious Freedom Awards created?

Religious Freedom Awards are born in 2014 in Madrid, conceived by the President of the Scientology Church of Spain. They emerge when it is realized that it doesn’t exist a similar prize given as a reward for the promotion and defense of Religious Freedom. In 2015 they became responsibility of the Foundation for a Better Live, Culture and Society.

Both, the Spanish Constitution and the Universal Declaration of the Human Rights, praise the need of existing a Religious Freedom in all aspects. Individual conscience and associative about the existence of the human being it’s linked to the search of the origin and the reason of the creation.

With this award, it is acknowledged the labor of those people or institutions that have shown through the years their fight and determination over the defense of Religious Freedom. Even beliefs that they don´t share, and whose actions have brought people closer to the goal of achieving Total Religious Freedom.

This prize “Religious Freedom Awards” is given in the shape of a Tizona sword, forged in Toledo. 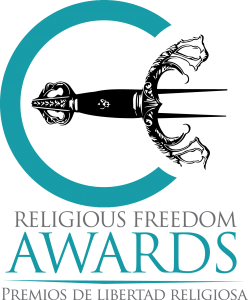 We have to admit that, from all weapons invented by the human being, none has yet reached the esoteric and mysterious symbology of the Sword. The sword first appears in the Metal Ages, at the IV millennium before Christ approximately.

Both in Prehistory and presently, the same in the different religions as in the popular folklore. Also a magic mission of fighting dark forces. This spiritual weapon, symbolizes the defense of peace and order by means of the authority that is granted by reason.

PBut moreover, the sword has a deeper and more esoteric symbology that is even magical. This, if we understand the word magical as the faculty of an object of transforming a person’s insides. Is, the archetype of the sword the one that gets more attuned with nature and human essence, as an extension of the individual, an extension of the active will and, because of that it has been and it is the physical representation of Honor and Dignity of the Knight that defends Light against Darkness.

More meanings of the Sword

For Alfonso X the Wise, the sword symbolizes the virtues of: common sense, strength, moderation and justice. Common sense calls for caution. Strength is the virtue that makes the man stay strong and steady against dangers that might prey on him. Moderation means temperance and peace of mind. Justice makes the person who applies it a right one, and it is right to get carried by it.

The Foundation for the Improvement of Live, Culture and Society at national level (with an international projection) registered with number 1780 under the protectorate of the Ministry of Education, Culture and Sports, of the Spain government. Tax Number is G87339412.  It is member of the Spanish Association of Foundations. The people who are part of it have a broad history of dedications to others in different aspects and scopes of life.